I’m going to take the theme of Art Sheffield quite literally and talk about zero hours contracts in the UK. I’ll firstly outline what zero hour contracts are and why we should care about them.

I expect that Zero Hour contracts need little introduction to most of us. We probably all know someone on one. Friends, relatives, colleagues. Some of us may well be on Zero Hours ourselves.

Zero hour contracts place workers on a company’s payroll but without giving them a guarantee of work. The employee is given no guaranteed minimum number of hours. If you’re needed on site, you’re called in. If you’re not, you’re left at home.

There have been many studies which have outlined the insecurity that can be associated with work patterns of this nature. But there is, in an important sense, a certain permanence to Zero Hours employment: workers are permanently without the guarantee of hours, and therefore permanently in a precarious position. The title of Ben Cain’s sculpture – which is being constructed on this Furnace Park site as I speak – captures this sense of precarity and impermanence. We are indeed in a delicate phase.

I’d like to bring out some of the economic and political consequences of this state of permanent insecurity in the rest of the talk.

We can identify three trends which have recently emerged in the UK economy with respect to zero hour contracts.

The first trend is that over the past few years, the number of people employed on zero hour contracts has increased rapidly. In 2005, official figures suggested that 54,000 people in the UK were on one. Today, the Chartered Institute of Personnel and Development puts the figure at 1,000,000, or 3-4% of the UK workforce. Other reports have claimed that over five million workers are on Zero Hours.

According to all estimates, since the crisis of 2008 and the deep recession which followed, the number of zero hour contracts in operation in the UK has massively increased.

What is more, these contracts are not located in an ‘informal’ or black labour market. On the contrary they are increasingly used as a core component of corporate business strategy. Well-known companies which use them include Sports Direct, Cineworld, Tesco and Boots. Nine out of ten of McDonald’s employees work on a zero hour contract. Similar trends are emerging within the Higher Education sector: a recent report showed that half of universities in the UK operate with zero hour contracts for staff.

The second point to be made about zero hour contracts is that they are associated with low pay. As the Resolution Foundation has shown, while someone on a standard contract is paid on average £482 gross weekly pay, a worker on a zero hours contract is paid £236 on the same measure. Pay for Zero Hours workers is therefore on average half that of those on standard contracts.

The third point to be made about zero hours contracts is that they are almost universally associated with poorer working conditions. Holiday entitlements and sick pay are worse, if they are existent at all.

What can we say about the ‘economics’ of zero hour contracts?

The first point to make is that from the perspective of the individual firm, the zero hour contract may seem to make sense. It allows companies to rapidly adapt to changes in demand for their products and services, and allows them to cut wage costs and minimise employee protection.

Let us put aside, for now, obvious moral objections to this wage-cutting logic. From the perspective of the national economy as a whole, if we generalise low-skill, low pay work throughout the economy, the effect is likely to be disastrous. While lowering wages and creating employment insecurity might make sense from the perspective of the individual firm, the fact remains that one business’s employee is another’s customer. By promoting a policy whereby wages are brought down, governments ensure that there is less money in the economy to be spent on goods and services. This drags demand out of the economy and compounds economic stagnation.

This is precisely the trend that we’re been witnessing in the United Kingdom in recent times. Real wages have declined by 6.3% in the past five years, the fourth worst decline of any European economy. The deepening of precarious, part time and ‘atypical’ work, including zero hour contracts, have all significantly contributed to this wage stagnation.

In this context of generalised deflation, the question then emerges: where will consumer demand come from? Over the past thirty years, the answer has been simple: from the ramping-up of consumer credit and financial sector debt. The ‘light touch’ regulation of the City of London and an explosion in private debt in the years before the crisis allowed money to be pumped into asset-price bubbles, particularly in the housing and commercial property markets. This allowed demand to be maintained at a relatively high level, in spite of stagnant real incomes.

Zero hours contracts are therefore likely to deepen the low-wage, low-skill nature of the UK economy and increase our unhealthy reliance on private debt as a source of consumption demand. Intensifying precarious employment as a way out of the crisis deepens the imbalances at the heart of the UK economy which led to our economic problems in the first place.

What about that hallowed and golden road to economic prosperity: labour market ‘flexibility’? Advocates of labour market flexibility see zero hour contracts as a form of employment contract par excellence, and as a sure way to ensure the long-term health of the economy.

We need to reveal this type of argument for what it is: uncritical and indefensible free market dogma. Throughout the UK, we have had some of the most loosely regulated labour markets of any country in the OECD for many years. And yet, against our closest comparator countries – Germany, France, the Nordic economies – our competiveness is extremely low. Our manufacturing sector is impotent. We run a huge trade deficit. We have high levels of import penetration, and high levels of public debt.

We should reject the economics of Zero Hours. It takes us down a path of deepening inequality, debt and over-work and deepens the weaknesses which already dog the UK’s economy.

But the Zero hours debate is about more than economics. It is also about politics. Unveiling the political logic which lies behind zero hour contracts is crucial if we are going to respond effectively to the increasing prevalence of these contracts today.

This has a clear disciplinary effect on workers who have managed to hold onto a job. If there are a large number of people on the dole, waiting to take your job, then it’s more likely you’ll think twice about complaining about poor conditions at work. You’ll maybe think twice about joining a union. Maybe you’ll do those ‘extra’ few hours, unpaid, in order to secure your position.
Unemployment therefore becomes a tool through which organised labour can be disciplined and the terms and conditions of employment worsened.

In these theories, this disciplinary threat was largely external. It involved a mass of unemployed individuals ‘outside’ of the labour market. With precarious employment, what we see is a process whereby insecurity and discipline has been internalised into the fabric of the employment relation itself. Precarity is written-in to the terms and conditions of the contract. Refuse a shift, step out of line, displease your manager, and you run the constant risk of having your hours removed – perhaps permanently. This practice is well known throughout workplaces in the UK. It even has a name – a worker can be ‘zeroed down’.

I think that the themes associated with Art Sheffield’s ‘Zero Hours’ project are of crucial importance to the economic debate which we are having today.

The UK economy has been edging out of recession and is showing signs of minimal growth. Over the coming years, and in particular in the lead-up to the election, we can expect the word ‘recovery’ to be near omnipotent.

The question of zero hours contracts and of precarious employment allows us to reflect on what the cost of this ‘recovery’ has been. It prompts us to ask a series of questions.

As growth returns, how are the proceeds of this being distributed throughout the economy?

What effect is this having on income inequality?

What impact is this having on the social fabric of our communities?

How sustainable is a recovery which rests on wage depression and asset-price inflation?

As with every question in economics, the question we should be asking is ‘who benefits’?

I hope that this will be one of the themes which emerges from the ‘Zero Hours’ project at Art Sheffield.
Who benefits? Who is losing out? And what are we going to do about it? 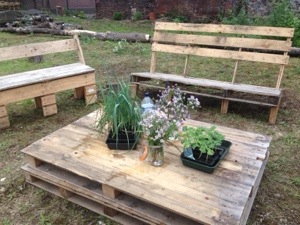 And back in Sheffield
#interrupteur today in Jessop West foyer with Emma Bolland & Jam Hopkins (JanHopkins.xyz) Exploring the interface between the handmade & the digital. All welcome
Our @coconhum workshop on Dec 4-5th. No coffee tax on social interactions! ✊🏼
#coconhum Arts & Humanities thinking about space & cities today in Jessop West. Join us tomorrow for day 2!