I’m currently writing an article on Barberousse, an infamous colonial prison built by the French in Algiers in 1856 and which, after three years of closure in the immediate post-Independence era, was re-opened by President Boumédiène in 1965, under the new name Serkadji.

On March 19th 2014, the day of the 52nd anniversary of the implementation of the Évian Accords, the Algerian Minister of Justice, Tayeb Louh, along with a delegation that included the Minister for Culture, Nadia Labidi, made a high-profile visit to Serkadji prison, which had recently been closed and its inmates transferred to other prisons across Algeria. A press announcement in December 2013 had already informed the Algerian public that the prison was going to be transformed into a museum dedicated to the national memory. The Minister’s statement to the media on March 19th – ‘‘Aujourd’hui, ce lieu historique redevient un lieu de recueillement et de mémoire’ (‘Today, this historic site becomes once again a site of contemplation and memory’) – was referring, however, not to Serkadji’s more recent history, but to the time when the prison was known as Barberousse – a renowned colonial penal insitution built by the French in 1856 and in which, during the war of independence, many FLN mujahidin were incarcerated and guillotined. In this article, the first substantial and holistic account of the discursive construction of Barberousse in cultural and political discourse, I will explore this most recent, but also other instances in which the prison has been deployed and harnessed as an emblem of repression and resistance, colonialism and the struggle for independence. I will begin with an overview of the what I identify as the key stakes in the quite extensive representation of Barberousse in cultural production, focusing both on the accounts provided by films, memoirs and novels (by Henri Alleg, Assia Djebar, Gillo Pontecorvo, Leila Djabali and Mohamed Saharoui) of the violence and abjection that constituted daily life intra muros, while highlighting also the prison’s becoming-symbol of the bloody birth of the independent Algerian state. In the second part, I will discuss the insoluble link between the prison and the (construction of the) nation state. Closed in 1962 by President Ahmed Ben Bella, who designated the prison an historic site and intended to turn it into a museum honouring the memory of the FLN, it was reopened in 1965, under its new name, Serkadji, by Houari Boumédiène, who – along with his successor, Chadli Bendjedid – used it to detain dissidents and political prisoners, as well as common law criminals. Thus, the prison became a means in the post-Independence era of shoring up the power of an increasingly contested regime. I will conclude with a reflection on the ways in which the museum now proposed by the Algerian state not only consolidates authorised histories, but also serves to erase others, including the massacre of 96 prisoners by state forces within the walls of Serkadji in February 1995. 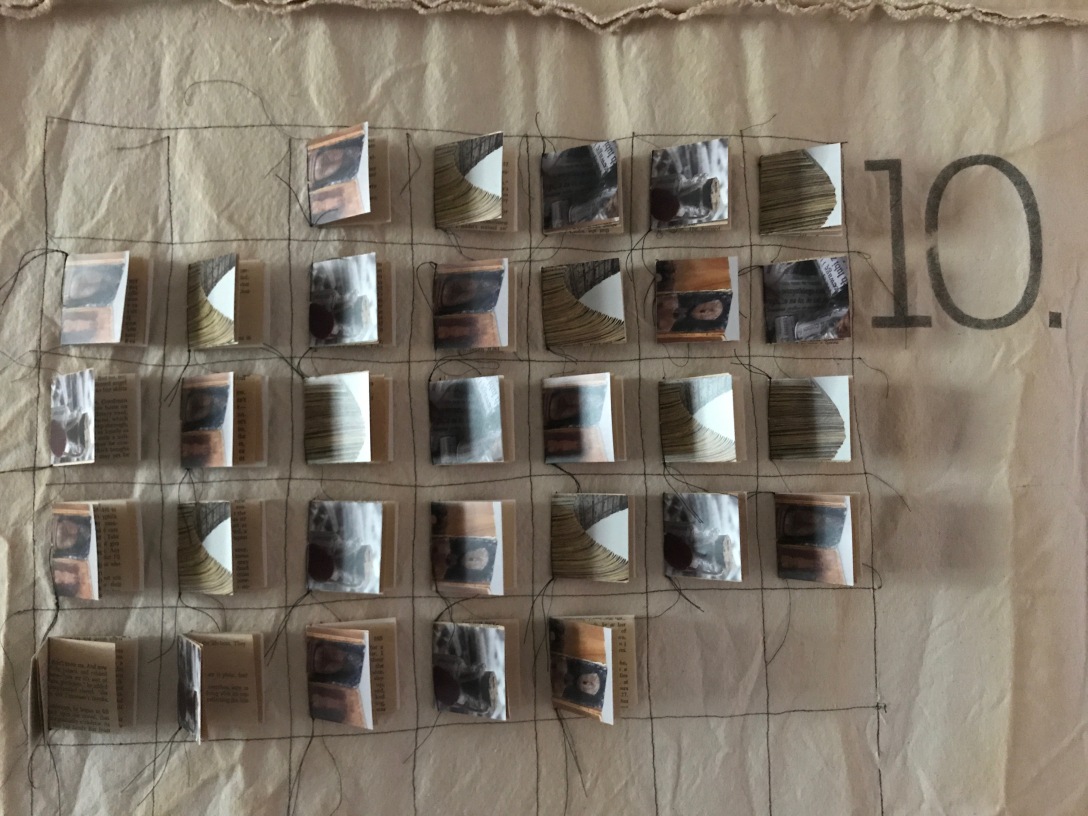 Here’s the programme for the symposium on art, copyright and copyleft that will take place at Bank Street Arts, Sheffield, on June 16th. There will also be an exhibition of works by Bryan Eccleshall. All proceeds from the event will go to Bank Street Arts. £10 entrance fee, including light lunch and refreshments.

The outcomes of the research will be an article and a short film about the project. In the longer term, we also hope to bring an exhibition of work by Francophone artists to Sheffield, which will explore the ways in which artists have sought to challenge some of the dominant tropes vehicled in press photography around the question of displaced peoples.

This research will explore how images of migrants and refugees shape public understanding and opinions of migration. Discourses around the threat posed by migrants and refugees to security, order, national identity and integrity have clearly impacted on the contemporary political landscape (for example Brexit, Trump’s election victory and the rise of populism and ethno-nationalism in Europe). As many scholars have observed, the media play a key role in both conveying and legitimising these political messages about migration. Less attention has been paid, however, to the specifically visual representation of displaced peoples and the impact this has on the public perception of migration – a gap this research will seek to address.
The criminalization and discursive ‘othering’ of migrants and refugees by the mainstream media has been the subject of rigorous and insightful academic research (Ibrahim & Howarth, 2015; Philo, Briant & Donald, 2013). In the field of visual studies, scholars working on so-called ‘atrocity photography’ have dwelled at length on matters such as the ethics of representing vulnerable subjects, the risks of voyeurism, the commoditisation of suffering, the ‘victimal aesthetic’ and what Sontag (1977) called ‘compassion fatigue’. Scholars from the visual arts (such as T.J. Demos [2013]) have explored how artists have challenged standardised visual constructions of migrants and refugees in their practice. The proposed interdisciplinary research project is among the first, however, to draw together insights from these various – yet intrinsically connected – areas of scholarship in order to think more closely about the ways in which migrants and refugees are constructed in visual media, and how these representations impact on opinion and understanding.
In the first instance, the research will identify recurring and dominant tropes in the representation of migrants and refugees. It will examine the use of formal, symbolic and paratextual elements in the visual construction of migrants and refugees, paying attention also to the ways in which the ‘figure of the migrant’ (Nail, 2015) is variously set in – or extracted from – the contexts of migration (such as environmental change, violence and conflict, human rights violations or deleterious socio-political and economic conditions). Techniques of image and discourse analysis will be used to better understand how images of refugees and migrants might solicit certain responses in viewers. We will also consider the ways in which artists have sought to both denaturalise and contest the political and affective viewer responses prompted by hegemonic visual discourse.
An analysis of the visual construction of displaced people in these images will be complemented by empirical research. Students will work with a focus group (including artists) to draw out their responses to – and reflections on – news photographs and selected artworks. Students will also seek to determine to what extent alternative images of migration (or self-representations by artists who are migrants/refugees) might mitigate or change participants’ responses to the dominant tropes afforded by press photography.

There will also be an exhibition of works by  Bryan Eccleshall, June 16th (including private view in the evening) – June 17th 2017.

You can listen to Richard Taylor’s recent programme on BBC Radio 4, Copyright or Wrong? (including an interview with Bryan Eccleshall) here.

occursus and Bank Street Arts are pleased to invite proposals for 20-minute contributions (including, but not limited to, papers, presentations and readings) that reflect critically on the issues and practicalities of copyright and copyleft, with particular reference to the arts (broadly interpreted).

Abstracts (300 words maximum) for 20-minute papers or presentations and a short biography (100 words maximum) should be sent to Amanda Crawley Jackson (a.j.jackson@sheffield.ac.uk) by May 15th 2017. Decisions will be announced in mid-May.

To reserve a place at the conference, please email Amanda Crawley Jackson (a.j.jackson@sheffield.ac.uk). Please note that there will be an attendance fee of £10, to include a light lunch and afternoon refreshments (tea, coffee, biscuits).  Attendance fees will be donated to Bank Street Arts.

Should you wish to purchase one of the works exhibited by Bryan Eccleshall on June 16th-17th, please note that 50% of the sale price will be donated to Bank Street Arts. Furthermore, should Bryan sell his recent work, After Pablo Picasso’s Guernica, in the course of this selling show, he will be donating 100% of the sale price to Bank Street Arts.  A catalogue of the exhibition, including prices, will be made available before and during the exhibition.

Running between February 13th – March 3rd 2017, the 10bn Talks accompany an online course open to all second-year students at the University of Sheffield. Many of these events are open to the wider University and the public.

L2 students from all disciplines, faculties and departments at the University of Sheffield can sign up for L2 Achieve More here. 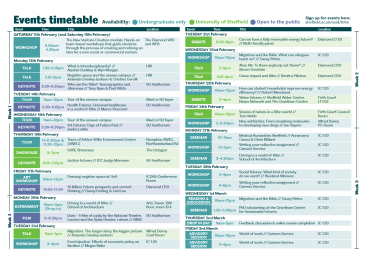 According to UN data, by 2055 the global population will have reached 10bn.

Level 2 Achieve More at the University of Sheffield is organising a series of events to accompany an online course aimed at second-year undergraduate students. Some of these  events are also open to the public.

I’ve been increasingly exploring the stabilities of place. In recent years writers on place have tended to emphasise place’s flux: the way in which it is a momentary, fragile assemblage of the varied intentions, actions and desires of those who happen to be present in (or otherwise having influence over) any seemingly coherent action-space. I get this kick against formalism, but I think that it tends to present place as too fluid. My recent projects have been examining various ways by which places become stabilised (and replicated). My recent article (details here) on the role of law in shaping the form and proliferation of the ‘classic’ cotton mill published in Geoforum earlier this year is an early outing on this. And now – after three years of gestation, my article co-written with Amanda Crawley Jackson of the University of Sheffield has been published in Social and Cultural Geography…

We walked along the river and I don’t remember any of our conversations, just that it was good to walk. My memories of this trip – starbursts: the café where we ate éclairs; the weak morning sun coming through the thin yellow curtains in our rented house in Pilrig; Ocean Terminal – empty, bluntly lit, shops closed; figuring out how the buses worked and travelling over and over between Princes Street and Leith.

I had not remembered that the trees were leafless, their branches thickly crosshatched across a pale grey sky. 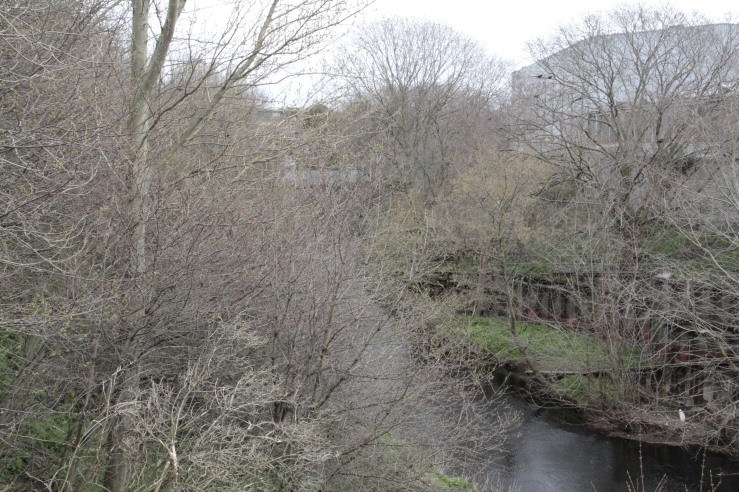 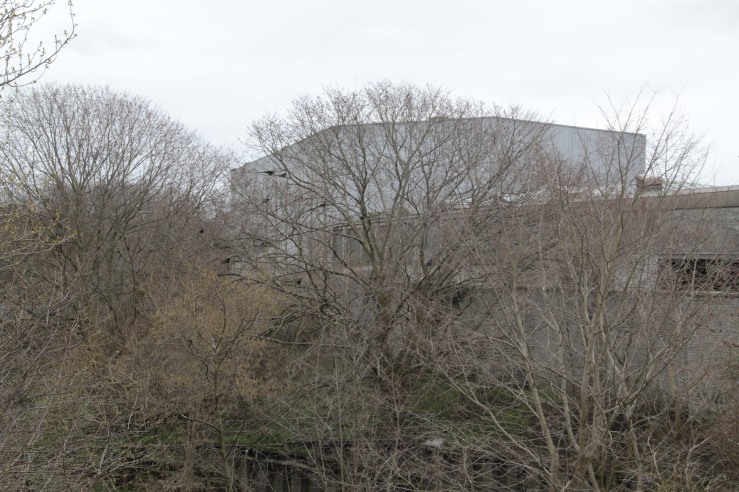 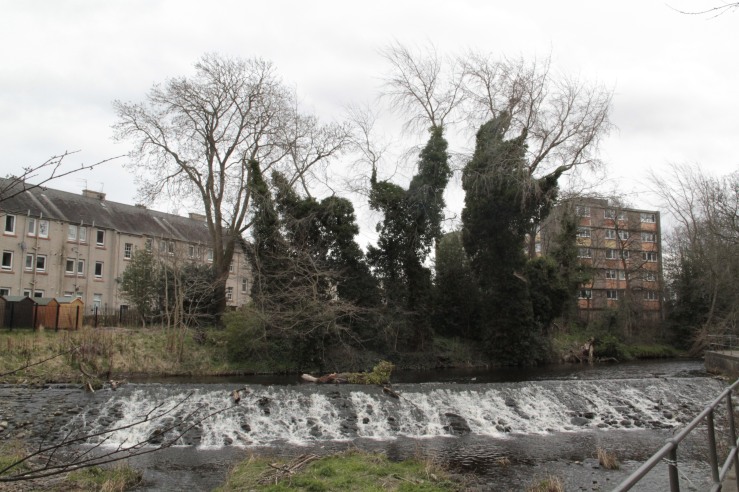 I walked to Salmon Pastures. A. told me he went to school and did his apprenticeship there. He explained how his father’s funeral cortège had travelled slowly along Carlisle Street and the men came out of the steelworks, doffing their caps as it passed.

To get there, I travelled by tram to Nunnery Square – a patchwork of car parks and police buildings, hemmed in by security fencing. I walked under railway arches, past carwashes and small factories, before crossing Norfolk Bridge (built in 1856) and taking a sharp right  along a small cobbled street to join the river.

An old man from Yemen was sitting on a bench watching the river crowfoot stream in long ribbons with the current. We talked for a few minutes and he told me how this is a good place. Quiet.

I walked with Daisy along the River Don from the Wardsend cemetery to Neepsend. At Wardsend, we started off a little way down the railway lines that run stark and clean through the undulating and overgrown cemetery, then veered off to follow the river itself, along the newly surfaced track that cuts through the vast mounds of debris – spolia from demolished works? – that loom either side. The electricity pylons hummed and crackled overhead and the thunderous engines of quad bikes rumbled and reverberated in an undefinable distance.

Everywhere we walk, waste. And amidst the waste, lilac and jack-in-the-hedge. The river bank is strewn with tyres and bottles and fast food wrappers, mattresses and plastic chairs, podgy black bin bags. A sign screwed to one of the metal kissing gates put there to stop the quad bikes : fly tippers – we are watching you.

At Wardsend, on the hill amidst the silver birch, there has been a fire. Graves squat in scorched earth, black tipped tendrils clasping shards of stone, displacing fragments of Victorian ironwork.

The Hillsborough playing fields are to our right. A man in a vermilion jersey sparks across the pitch. A sheep’s skull – or perhaps it is just a carrier bag – is revealed, briefly, as the river washes across it. Bottle-green, muddy mallards drift.