We are pleased to announce that we’re preparing a new project with Hondartza Fraga, a Sheffield-based Spanish artist.

I am a visual artist, originally from Spain, based in the UK since 2005. I keep my practice active between the cities of Santander (northern Spain) and Sheffield. The common thread running through my work is the individual and collective relation to the world around us; the different ‘distances’ between ourselves and everything else: spatial, temporal, emotional, cultural and imagined. The cultural exchange between home and homeland is implied – more or less unconsciously – in most of my work.

My work explores the relation of dependency between images, objects and the individual. I am interested in different image-making processes to explore the physical and emotional distance between opposites. I use different mediums in my practice, primarily drawing, photography and video.

My latest works revolve around the notion of loss, distance, journey and the meaning of home. In my drawing, I am interested in using souvenirs and domestic objects to force a dialogue between the domestic and the remote, suggesting narrative and contradictions between seemingly unconnected subjects.

The discussion will take as a starting point three video works by the artist, Hondartza Fraga, including Figments of Home.

There will also be a text for discussion, a copy of which you can obtain by sending an email to sheffieldseminars@gmail.com

Please remember to reserve a place, as the number of chairs available is strictly limited! If you’d like to attend, please send a message via the usual Reading Loop email address – sheffieldseminars@gmail.com 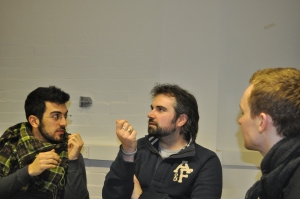